THE PARTICIPANTS OF THE TOURNAMENT “NOVI SAD 2016”

These are the teams who will participate in international beach handball tournament NOVI SAD 2016, which will be held from 23rd to 26th of June on city beach Štrand. First team which will be presented is Serbian club TOUAREG from Bačka Palanka.

2AREG – FRIENDSHIP ABOVE ALL 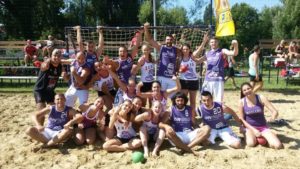 Beach handball story of this team began three years ago. The name means sand warriors. Their success on the tournaments in Bačka Palanka, Kikinda, Apatin confirmed the quality of the guys who grew up with handball. The first international appearance was very successful and it happened a year ago. The team won the torunament in Bulgarian city Primorsko. 2AREG finished last season on the 8th place of EBT Tour. This year, the team won the 9th place on final tournament in Thessaloniki. Women’s team was established last year, as the younger men’s team.
Women’s team won the tournament in Bulgarian city Primorsko for the first time, until men’s team repeat the success from previous year and became the champion for the second time. Next team is coming from our neighboring country of Hungary. It’s the Hungarian Men’s Beach Handball Team. They have achieved many significant results both in the World and the European Championships. This year they will host World Championship in beach handball which will be held on Margaret Island in Budapest. In order to prepare themselves in best possible way for the upcoming World Championship they decided to participate in the international tournament in Novi Sad because, as they say, this tournament is among the very elite of beach handball tournaments throughout entire Europe. “Budaors Beach Stars” is another team that comes from Hungary and this year they celebrate their 14th birthday.Most of the players from this team are also part of the Hungarian national team. In addition to participation and highly successful results in prestigious tournaments, these guys can be proud of the fact that the five players in this 14 years, were awarded with the “Best beach handball player of the year award” in Hungary. The next team come from country which is 2 223 km far away from Serbia. It is Russian team „Ekatarinodar“. They are current champions of the Champions Cup in Gran Canaria. This year they took second place at EBT Finals. They have been very successful recently and they are in top three beach handball teams in Europe. One of the most famous beach handball players is the member of this team. He is Roman Kalashnikov who has been awarded for his performance in the national team, as in this club. We are very happy that we can welcome girls coming from beautiful country of Italy, winners of bronze medal from European Championship in Lloret de Mare,and golden medal on Mediterranean games in Pescara from last summer. These great girls make their successes as a team,and also individually. Monica Prunster got an flattering recognition for best goalkeeper of European Championship in Lloret de Mare and Anica Niederwieser deservedly won a title of the best defensive player of World Championship in Brasil. The next women’s team come from Hungary. They are current champions of EBT Finals, as Champions Cup in Gran Canaria. This team will play in Novi Sad with seniors, juniors and cadets. The majority of the team are players who play for the national team of Hungary, which are current champions of Europe with seniors and juniors. Ciski Reni and Agnes Gyori were members of the team “World”, which is consisted of the best players, and played an exhibition match in Lausanne when beach handball officially became an Olympic sport. This women’s club come from Hungary and was founded in 2002. The same year became the champion of Hungary. Girls have played every EBT Finals since 2009 and won the first gold medal in 2014. The OVB-Beach Girls took up beach handball more than 10 years ago. The founders of the team created a strong bond within the team, where friendship is most important. They firmly believe this is the secret of their success.